Pennebaker’s film documents Bowie’s final show with his most famous band, at London’s Hammersmith Odeon on July 3, 1973.  Release of the film was delayed by post production and probably rights issues, but when it finally came to market it was embraced by fans as a classic music documentary. Postrers were sent to movie theaters only. 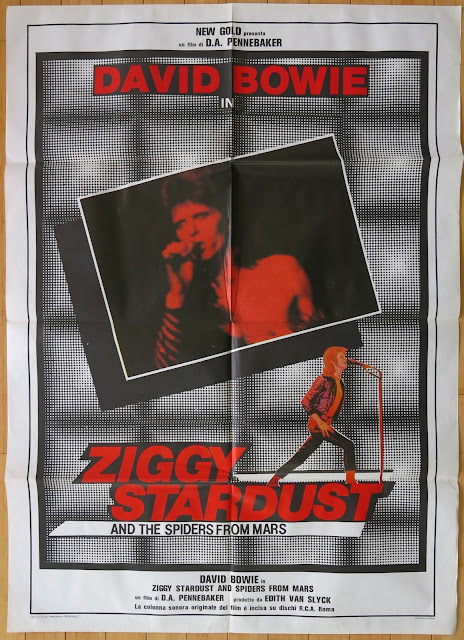 Posted by purpledoggart at 8:03 PM No comments:

Original tour program from The Beatles 1965 U.S. tour.  28 pages of photographs and text with a few vintage ads, this captures the excitement of The Beatles on their second tour of America.  Booklet measures 12 x 12 inches. 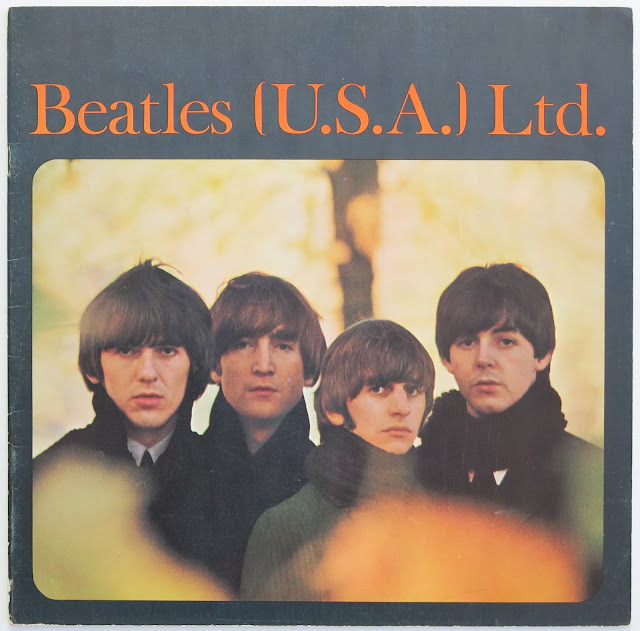 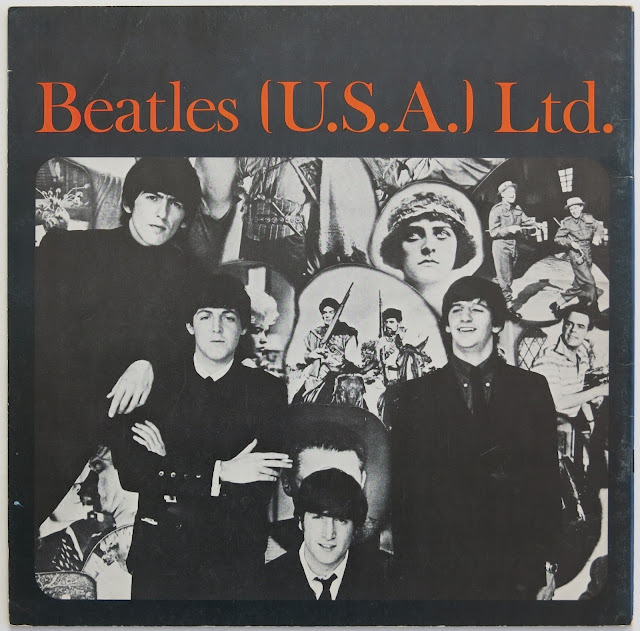 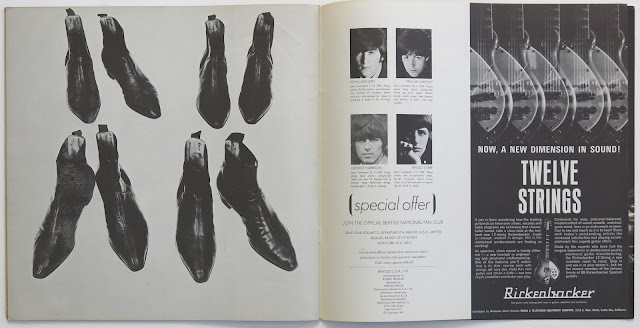 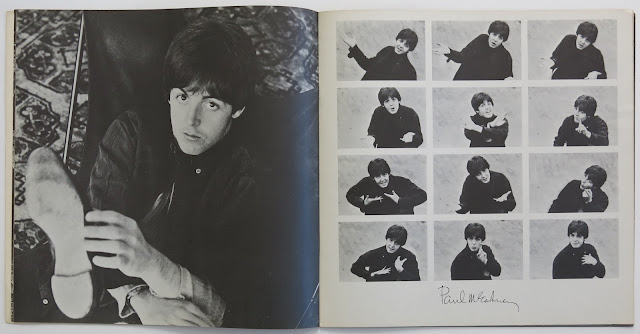 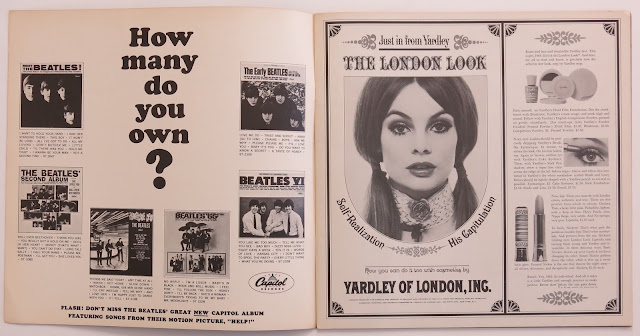 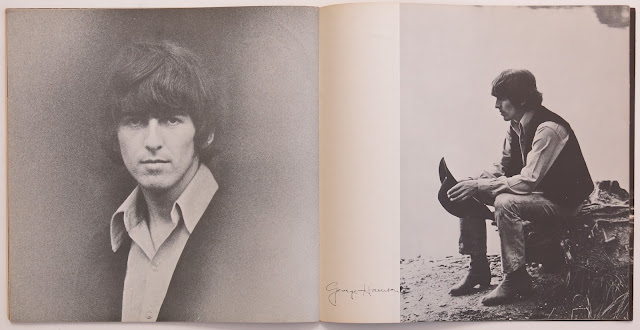 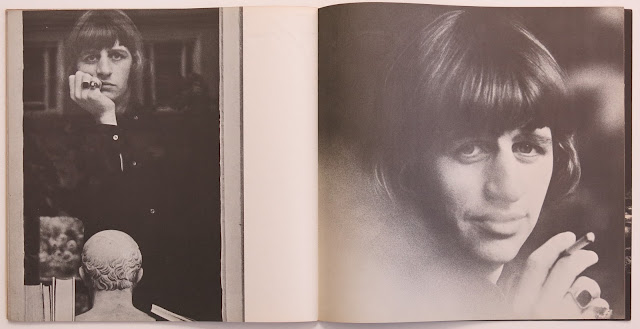 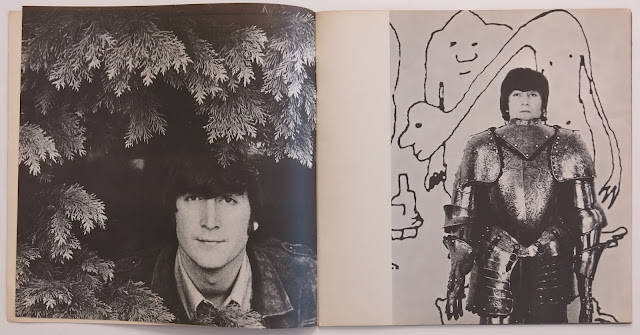 Posted by purpledoggart at 7:56 PM No comments:

A beautiful original tour program from The Beatles 1966 U.S. tour, their final concert tour, which ended at San Francisco’s Candlestick Park – the Beatles last-ever live concert.  32 pages of photographs and text with a few vintage ads, this captures the excitement of The Beatles on their final tour of America. Measures 12 x 12 inches. 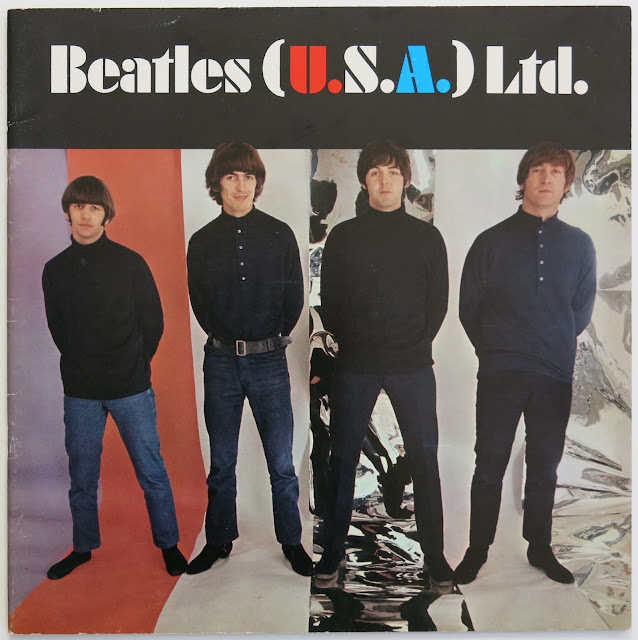 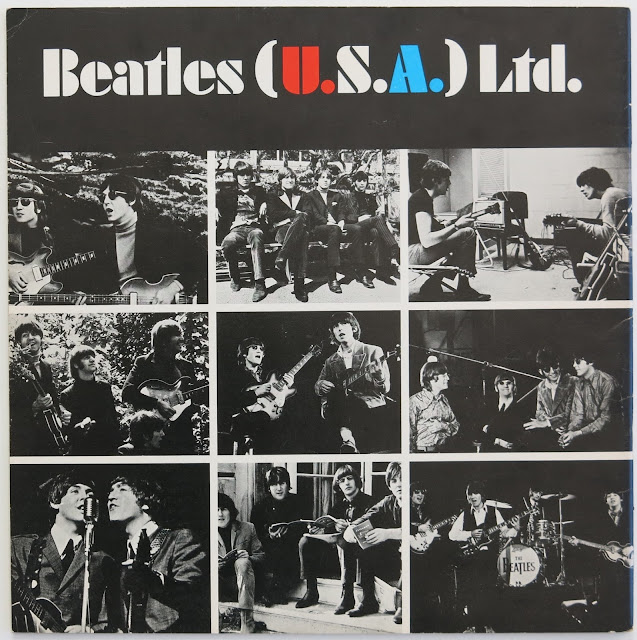 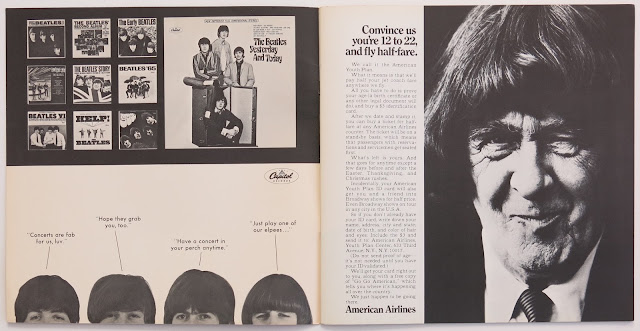 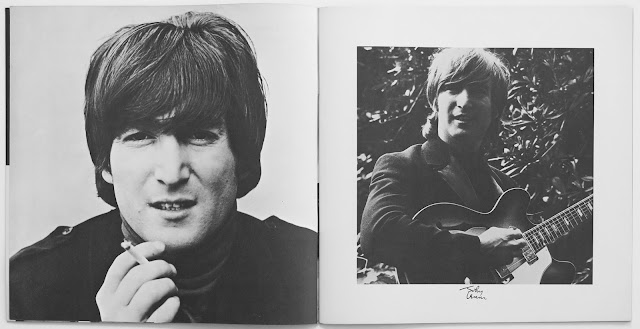 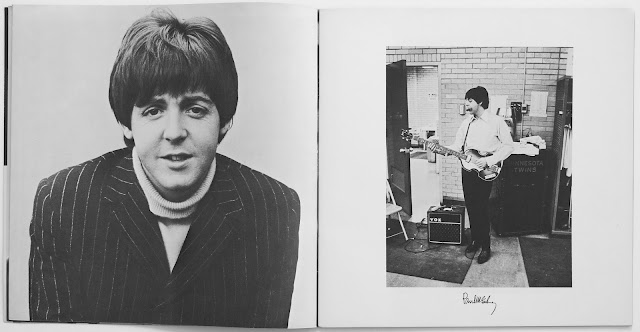 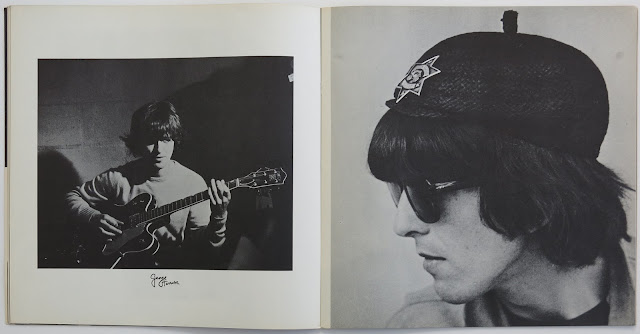 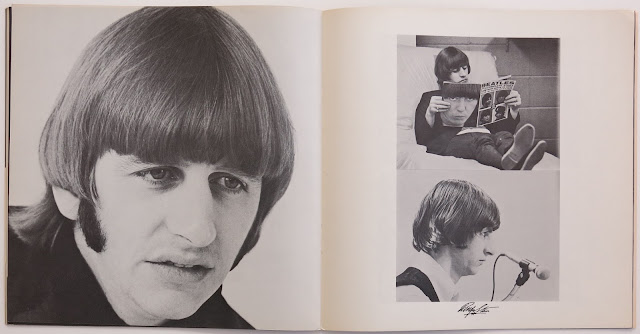 Posted by purpledoggart at 7:47 PM No comments: 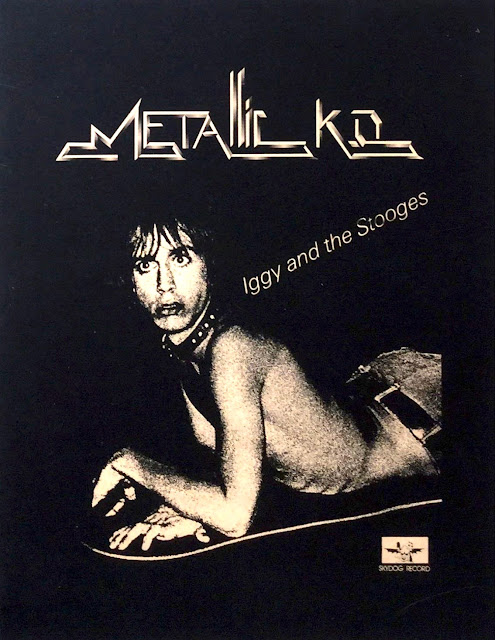 An extremely rare original French promotional poster advertising the live Iggy and the Stooges album Metallic K.O.  This legendary semi-legal live album was first released in 1976 by the French label Skydog Records, who made this poster. Recorded partly during The Stooges final show at the Michigan Palace, it documents Iggy baiting the audience while being pelted with eggs, ice, beer bottles and other missiles.

Metallic K.O. was one of the only Stooges albums available during the 1970’s, and was essential in furthering their legend.  While subsequently released a number of times by various labels, this poster dates from the original Skydog release.  Printed on thick stock, in near mint condition, measures 24.5 x 18.5 inches.
Posted by purpledoggart at 11:34 AM No comments: 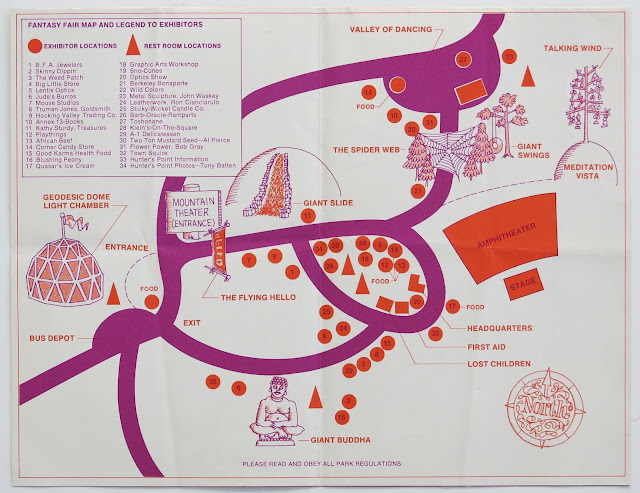 A four page program for the June 10 & 11, 1967 KFRC Fantasy Fair and Magic Mountain Music Festival, considered to be the real start of the Bay Area’s “summer of love” and the world’s first rock festival.  The concert, presented by San Francisco AM Radio station KFRC, was a benefit for the Hunter’s Point Child Care Centers.

Taking place one week before the better known Monterey International Pop Festival, 36,000 fans gathered on the south face of Mt. Tamalpais in Marin, California to see 25 acts including The Doors, The Byrds, Jefferson Airplane, Captain Beefheart & His Magic Band, Kaleidoscope, Canned Heat, The Charlatans, the Chocolate Watchband, The Seeds, Tim Buckley, Country Joe & The Fish, The Steve Miller Blues Band and many more (despite the lineup printed here, Moby Grape, Wilson Pickett, 13th Floor Elevators and Smokey Robinson & The Miracles, who did not appear. 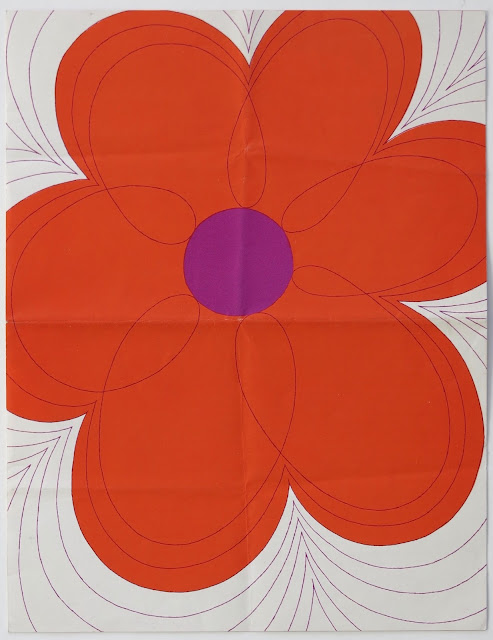 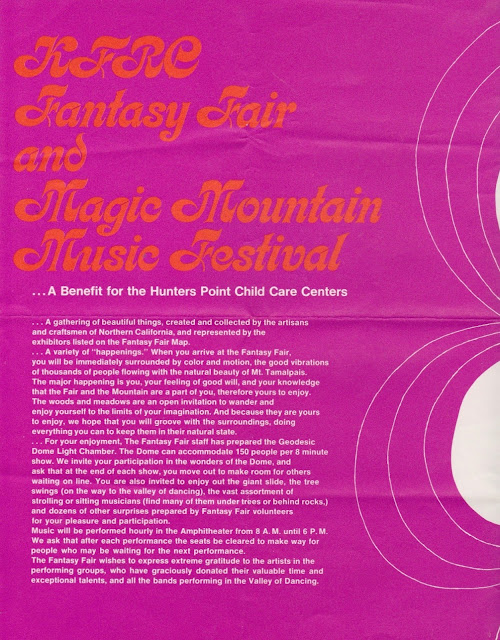 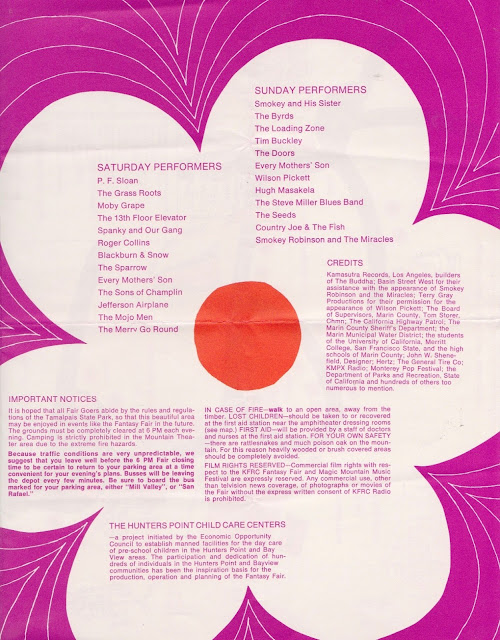 Posted by purpledoggart at 9:37 AM No comments: 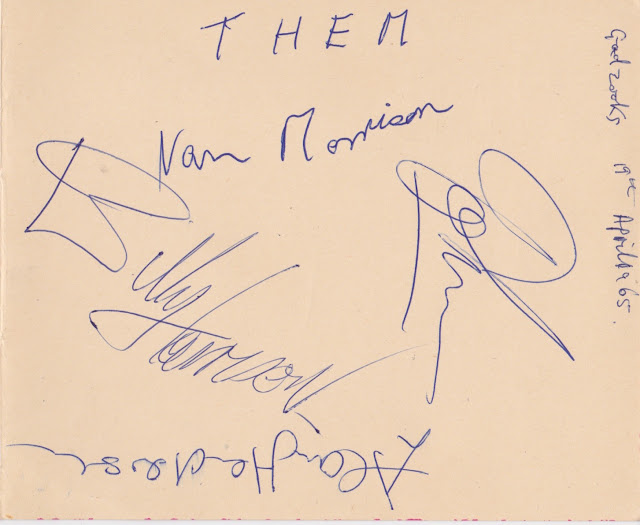 Page from an autograph book signed by the classic lineup of Them, with Van Morrison (who has added the band name above his signature), Billy Harrison, Alan Henderson and John (Jackie) McAuley.  According to a notation on the page, these autographs were obtained at the English television show Gadzooks! on April 19, 1965, a mere six weeks after Them released their third single “Here Comes The Night” (the follow up to their extraordinary first two 45’s–“Don’t Stop Crying Now/One Two Brown Eyes” and “Baby Please Don’t Go/Gloria”). 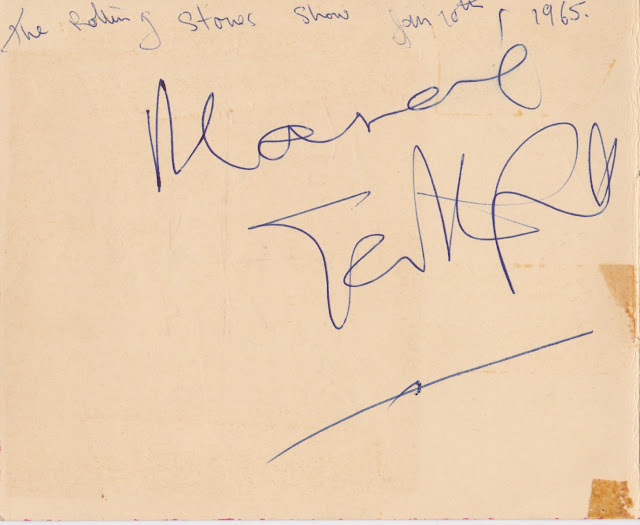 Posted by purpledoggart at 9:29 AM No comments: 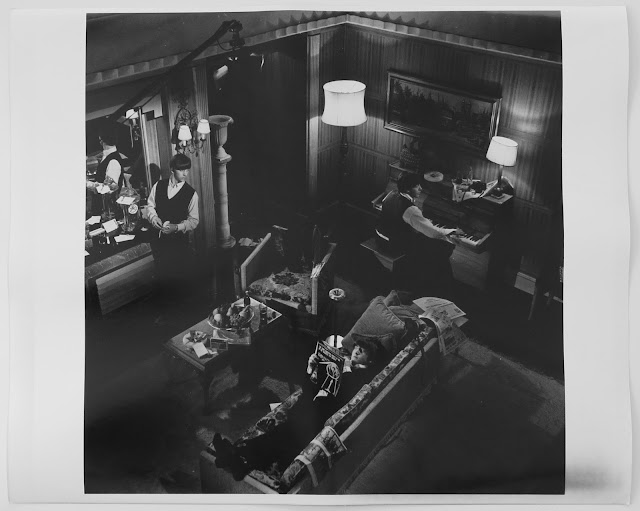 A B&W 16 x 20 production photograph of John Lennon, Paul McCartney and Ringo Star taking during the filming of A Hard Day’s Night, and printed from the original negative.
This print was made circa 1980 by celebrated photographer Jim McCrary, who’s photographs graced the covers of many famed albums including Carole King’s Tapestry, Joe Cocker’s Mad Dogs and Englishmen, and albums by Cat Stevens, Lynyrd Skynyrd, Bobby “Blue” Bland, and B.B. King.

Print comes from legendary music business executive Jeff Ayeroff, who signed the back of the print, below the legend. A Hard Day’s Night production photograph printed from the original negative by Jim McCrary.  I oversaw the design of the poster and visual materials for the 1981 theatrical re-release, and this photograph was printed during the design process. 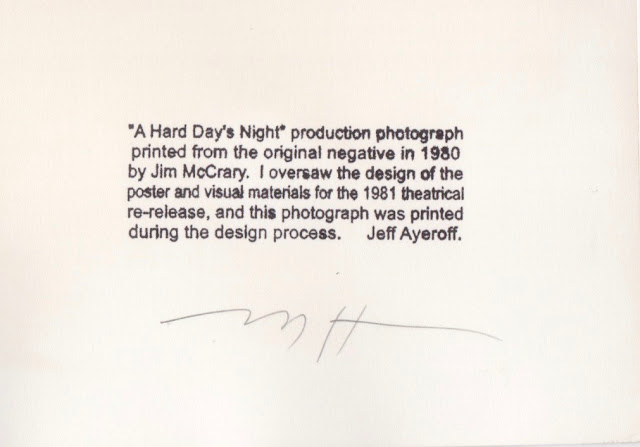 Posted by purpledoggart at 9:22 AM No comments:

Welcome to Period Image Art/DigiEpins official blog. A collection of vintage and digital historical paper ephemera from around the world featuring magazine print advertisements, periodical image prints, art prints, articles, documents and vintage postal ephemera.
Go to our "Items For Sale" page for our current list of available products from our blog page. Ordering is secure, quick and easy through Google Checkout. Thank you.